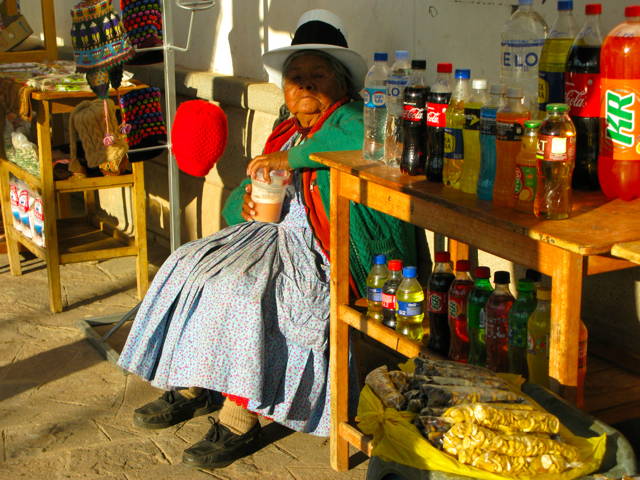 It was the rare chance to explore a province suffused in myth and little known to outsiders yet hiding in plain sight. Until recently, Peru’s Sacred Valley has been ‘flyover country’ for most travelers, a place seen in fleeting glimpses from the train between Cuzco and Machu Picchu. Since so few outsiders lingered in this region’s simple hotels or hiked the rough mountain paths, folkways of Peru’s once mighty Inca Empire have remained virtually untouched. Here, women in voluminous pollera skirts and broad brimmed bowler hats still hand weave dazzling textiles from plush alpaca wool and small scale farmers plow fields with oxen, tossing handfuls of quinoa seed from a gunnysack. A difficult destination for the independent traveler, this was an ideal place for Explora, a company known for bringing high-end accommodations to remote parts of South America. So, when we four women learned that Explora Valle Sagrado had finally opened in July 2016, we immediately made plans to visit. Landing at Cuzco airport a bit breathless from the 11,000-foot altitude, we were straining at the reins, eager to peer through this newly opened window to the past and keen to test our bodies against the wilderness.

Building for nearly a decade

Arriving at the modernist lodge that seemed to melt seamlessly into the landscape, we were surprised to find that the hotel itself was a metaphor for the beauty and complexities of the region. Nearly two decades ago, Explora began seeking a site here. They’d already opened lodges in far-flung locations including: a Patagonia biodiversity reserve, the eerie heights of an Atacama Desert oasis, the volcanic Rapa Nui island, and some forged, overland routes across some of South America’s wildest tracts with safari-style Travesias, inspired by the ancient ideal of the nomadic journey. Yet, establishing a base in this historic part of Peru proved especially difficult because of their mandate to respect and preserve local culture. The treasures in this heart of ancient Inca civilization, such as tombs built into high massifs and terrace farms cascading down the mountainsides, were so bountiful it took a full decade to find a spot that wouldn’t compromise their integrity. 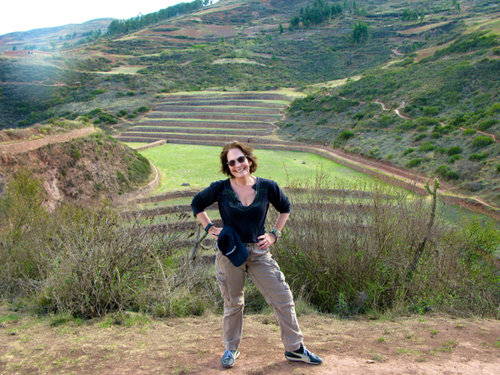 When Explora finally secured a colonial-era plantation hacienda down a winding path in a clearing fringed by saw-toothed mountains, building was set to commence. Internationally renowned architect, José Cruz Ovalle, aspired to create a structure that would honor its surroundings, preserve the ecology, and comfort guests after hours of exhilarating exploration under close supervision of the Peruvian Institute of Archaeology. But, the construction project soon became an archaeological maelstrom; New artifacts continued to surface, including the Inca farming platforms that now flank the hotel’s sloping walkways, and the building had to be redesigned three times to preserve them in situ. The architects and archaeologists were floored by the richness of their finds and, as a testament to the extraordinary skill of Inca masons, have been restoring structures with only their age-old adobe mix and traditional tools. Of course, this all takes time. And though, after nine years, the main hotel is finally ready for guests, the spa building, a fresco-walled cottage with dreamy garden views, located a discreet distance from the main family house as it was home to the hacienda owner’s mistress, took longer. A visit to the archaeologists’ field office revealed part of the reason: among the piles of ephemera waiting to be cataloged were two bags of skulls. Click here for Janet's travel tips!

A deep dive into Inca culture

Beyond the adventurous design and unsparing service, travelers choose Explora for the kind of intense interaction with local culture and the wilderness most can’t experience on their own. Sustainability and style are part of Explora’s core concept, from biodegradable slippers to cathedral ceilings built entirely from local woods, creating sight-lines directly through the ancient, Urubamba Valley cornfields. Equally vital to Explora’s model is supporting traditional livelihoods, and local farmers arrive daily to tend the waving fields of quinoa surrounding the hotel. Produce from this artisan farming lures accomplished Lima chefs, like the resort’s culinary director, Carmen Maria Carmona Schwartzmann, who offers ruby-red prickly pear juice and quinoa porridge at breakfast and can revel in the Andes’ 4,000 potato varieties and 400 types of corn. SPOILER ALERT! You may want to feign surprise at the end of your hike when guides pull out a carefully hidden spread of chef snacks like artichoke hearts, mozzarella canapés, Peruvian beer, and a thermos of local, cure-all Muña tea. (Best drink your fill here the guides advise, since those ‘medicinal’ ingredients might not pass U.S. customs.) 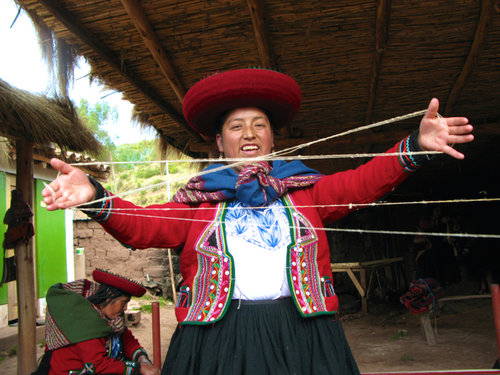 Indeed, many feel it’s these exceptional guides that put Explora in a league of its own. Hand picked for their knowledge of the region and their outdoor experience (all of them are certified Wilderness First Responders), and their communication skills, these knowledgeable and enthusiastic guides commune with guests each evening in the hotel’s lounge to organize the next day’s outings. They’ve designed more than two-dozen explorations of the surrounding valleys, mountain peaks, and local communities on foot, by bicycle, or in a van, which can be modified for any fitness level and diet. Vegan? They’ve got you covered, even on long mountain treks. Wonky knees? They’ll find a tame trail where the scenery is just as breathtaking as on routes that require an Olympic-style broad jump over a stream. Even once on the road nothing is carved in stone, as guides are always open to those serendipitous moments that let travelers participate in local life. View the selection of items inspired by the Janet’s Peru Journey.

These explorations will test you

Yet while guides match excursions to your abilities, be prepared to bring your best as Explora’s hikes can be challenging. Witness the Incañan, diffidently described on the website as “physically demanding”. Reading on, we find it calls for more than nine hours of climbing to an altitude of 15,190 feet. When we request this hike at the evening planning session, our guide immediately turns serious, ticking through the requirements: Have you been here for three days and fully acclimated to the altitude? Did you bring a facemask and layers for fierce mountaintop wind and cold? Are you aware that since hikers must be off the mountain before dark the pace is quite demanding, and those who don’t keep up will be sent home at the ‘point of no return.’ These concerns only fired the will of my three companions, but for me it was a signal to bow out. 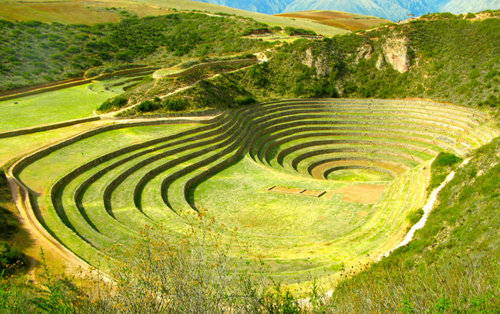 While my friends were mountaineering, I spent the day with a group of Quechua women, spinning freshly-shorn wool into twine, pounding black corn and wildflowers into vivid red dye, and learning to drive wool so tightly into the loom with a llama bone the textiles became waterproof. By the time I returned, the sun was already low, so I settled before the fire with a devilish Pisco Sour from the open bar to await my companions’ return; I waited and waited until long after dark. Our calls to their phones went unanswered. “Sometimes they’re beyond the cell signal” the guides tried to assure me, but it was another tense hour before the vanload of exhausted hikers pulled through the gates. “Surreal experience,” “faced my fears,” “exhilarating vistas,” “almost puked from the altitude,” they gasped. My admiration was boundless. The ascent was far tougher than expected, they admitted: five hours of relentless climbing until they reached the ravishing summit. Nearly too intoxicated by their feat to eat the picnic lunch, their euphoria was cut short by the guides’ good-natured call: “Let’s go! Just five more hours to the bottom.”

Revived by bracing Caipirinhas, they refueled with house-baked breads to sop up dinner’s hearty quinoa stew before limping off to a well-deserved sleep. Was I ashamed for not making the attempt? A little. But I found that pushing my physical limits was only one of the rewards for an Explora journey. Instead of mountain-tested hamstrings, I left Peru’s Sacred Valley with a different set of mementos: the notecard made of pressed wildflowers, an impromptu gift from an artist we encountered on the Yucay trail, a slim green friendship bracelet tied to my wrist by a Quechua weaver, and a sensation I still can’t shake. While hiking through the 500 year old crop circles at Moray, a structure which still confounds scientists as each one creates a different microclimate, I wondered what other secrets lie buried in this ghostly civilization’s past. Cuzco and Machu Picchu will continue to attract the Bucket List throngs, but, for me, traveling away from the crowds down the twisting single-track lanes of Peru’s Sacred Valley is a direct path to understanding the half-shadow world of the long gone Incas.

The shortest route to Peru’s Secret Valley is flying LATAM through Lima to Cuzco. LATAM has an excellent Business Class on its overnight 787 Dreamliner flights between New York and Lima with stylish red cabins, Ferragamo amenity kits, fluffy comforters, cuisine worthy of Lima’s inventive food scene, and compassionate service, including dimming lights during the 1 AM dinner.

Still, the high point of my journey came between flights at Lima’s VIP Club. While it’s as devoid of signage as a downtown hipster haunt, those who follow the generic, VIP Club posts will find a space known to insiders as the “Sumac Club.” It’s named for the Peruvian “exotica” singer Yma Súmac, a 1950s cult figure who grabbed American tabloid headlines for her eerie, five octave vocal range from low baritone to whistle register, her ability to sing in ‘double voice’ which sounds like two notes at once, and her dubious claim to royal Inca heritage. The club’s more tangible exotica include local alfajores pastries, sandwich cookies filled with creamy dulce de leche, passion fruit and pear juices, the disturbingly amber-hued Inca Kola, and an entertaining Rube Goldberg-style orange juice squeezer akin to a Ferris Wheel. Equally welcome were the quiet zones, including a balcony with lounges and TV headphones and a walled off sleeping area with recliners and massage chairs where both food and shoes are barred.