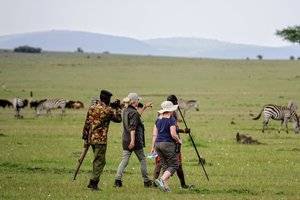 At Don Young’s Newland Tarlton camp in the Maasai Mara, I was able to do a walk through herds of game accompanied by a Maasai tracker and an armed Park Ranger.

My feet were hot and sticky. Amidst herds of impala and zebra and families of warthogs and mongoose, accompanied by a Massai warrior and a Kikuyu game warden, we’d walked across a vast plain of freshly-sprouted grass dotted with purple wildflowers. An abundance of colts, fawns, and piglets gave me the feeling I’d returned to the Cradle of Life, and the hike surrounded by horizons untouched by civilization gave me a new sense of freedom and unity with Nature. 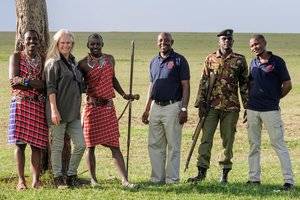 A stroll on the Maasai Mara involves an entire entourage of trackers, guides, and an armed ranger.

“But,” Don insisted, “burrow your toes deep into the dirt. Close your eyes and connect to the energy of all human-kind. Because it is here in East Africa that mankind first rose up onto two feet and set off on the first safari that ultimately reached all corners of the populated world.” 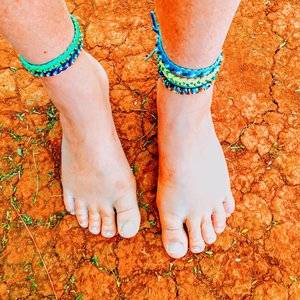 Earlier at camp, Don had challenged us to interpret a cast made of some footprints. Now, as the sun set in the West and as the full moon simultaneously rose in the East on this Spring Equinox evening, Don settled in to talk story. An unusual combination of: trained forensic osteo-palentologist, academic historian on African explorers, naturalist, and author of novels and non-fiction, Don is renowned for his story-telling, and the story he told went something like this: 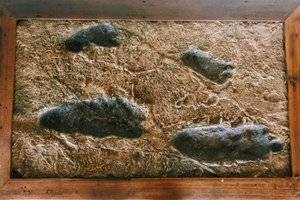 Don’s cast of the 3.6 million year old footprints found by Mary Leakey at Laetoli indicate on large hominoid with another smaller one following in his foot prints and a child walking alongside. Splashes from raindrops indicate the group was walking in the rain over the volcano ash-covered ground.

“Thank goodness for the playfulness of those who can turn even a pile of dung into a diversion because sometimes magic happens when the shit hits the fan. It certainly did in 1976, when two paleoanthropologists working with Mary Leakey were tossing elephant dung at each other in Laetoli, a hominid archeological site in East Africa. As one dove out of the way, he fell on his face and found himself looking at a trail of prehistoric tracks.” 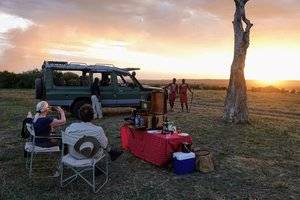 For many safari aficionados, the quality of a safari outfitter is measured by safari sundowners and storytelling, and Don Young sets the standard for both.

Over the next two years, Mary Leakey excavated the site, discovering the set of footprints that Don showed us in his tabletop cast. Now, he painted a picture of what had happened. The volcano Sadiman erupted, spreading a cloud of fine ash, like beach sand, over the landscape. A light rain turned the ash into something like wet cement, perfect for trapping footprints. Escaping the calamity along with African mammals were, spectacularly, a trio of hominids, many think a father, a mother following in his footsteps, and a child. They dashed across the ash as the rain picked up in intensity. The volcano erupted again, dropping more ash, that sealed the footprints like a laminated driver's license. Finally, erosion over millions of years unveiled the prints for Mary Leakey to discover.

Her discovery of footprints nearly identical to ours was revolutionary. Prior to this discovery, evolutionary thought maintained that bipedal walking was motivated by the need to free hands for tools and hunting. But the 3.6 million year old Laetoli footprints debunk this theory as they prove that hominids were walking upright over a million years before the adoption of tools. 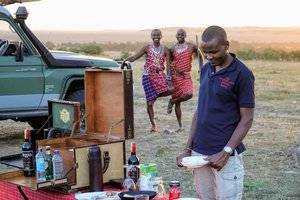 Safari sundowner storytelling gets an extra sparkle from a variety of drinks extracted from vintage-style British Campaign replicas of bar trunks that Don Young manufactures and sells. This nomad plans to have one in Malibu soon!

These footprints are the first recorded prints of our human journey. Like me, these three had fled their home from a natural catastrophe and had set off on a safari to find a new life. Their tracks left a story. What story would my tracks one day tell?

Isn’t that the creative crisis that HipSilvers face? At this phase of life, we may find ourselves at a juncture where, willingly or not, we are released from work, households, child-rearing, and relationships. How will this loss steer our story? What is the third act we will write for ourselves? 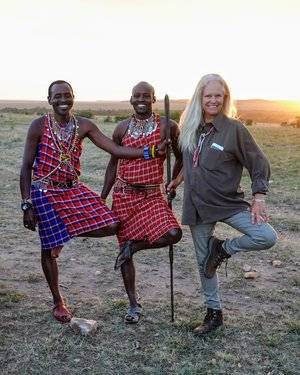 Whatever the story, wherever the journey, if you embrace playfulness, you have one leg up is what Don Young’s Maasai trackers have taught me.

I’d initially fallen under the spell of safari in my 40’s as a way of crafting the story of a newly-divorced single-mother. Joint child custody afforded me the free time to travel, write, and photograph my book, SAFARI CHIC, on the interior decorating of African safari camps. I became fascinated with the life-style of Karen Blixen and was impressed by her philosophy that “Any problem can be dealt with if it can be written into a story.”

Now, once again, I have the gift of time and the motivation to write as, like Karen Blixen, my home and farm went up in flames. But, with all the upheaval where could I find the ‘space’ or place to write? 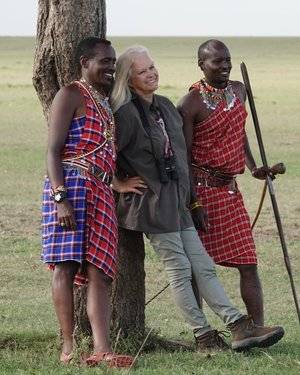 The beauty of safari is having the ‘space’ in your life to explore and expand your horizons.

Fortunately, my favorite safari guide Don Young had come to the rescue. Among all the guides I had met, Don had gift of a master tracker, the ability to transform a bed of ashes into a wellspring of life.

“What do you want? What do you need?” Don asked me. In the blink of an eye, I answered the same as Karen Blixen when asked the same question: “What I want is to go on safari once again.” And, with a nod to Virginia Woolf, I added that what I need is ‘a tent of my own’, a space where I could reconnect with the healing power of Nature, where I could explore and expand my creative calling, and where I could begin to craft the final act of my story. 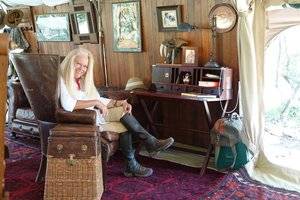 Sitting pretty in ‘a tent of my own’ at a Safari Writing Desk designed and sold by Don Young of Newland Tarlton Safari alongside his Fisherman’s Basket Seat. I’ve already got styling ideas for the rebuild of my Malibu Chic Safari Tent.